“In spite of harassment by the press, business, the Commissioner of Education and the Superintendent of Schools, the Teachers Federation remained loyal and continued to work for the welfare of the school, students and teachers.” – Michael J. McDonough for SPFT’s 50th Anniversary

Teachers in Saint Paul began organizing for better schools the 1890s. The issues they were facing would sound familiar to SPFT members today. They opposed merit pay, advocated for tenure protection, and called for teachers to have more say in curriculum and textbook selection.

Their solution to these problems will also sound familiar to members of SPFT: standing together and fighting for better, more equitable public schools.

This commitment to working collectively as a powerful force for change and democracy has guided our union from our beginning.

We won free textbooks for all students, tenure protection, and equal pay for women teachers because members organized. We won lower class sizes and class size caps because members organized. We won support for special education students, restorative practices, more English Learner supports, authentic parent engagement, high quality professional development, and a voice in the decision making in our district because we organized. And we will win full funding for our public schools and the mental health supports our students need because we will continue organize in the months and years to come.

As public school educators, we are committed to building a just, democratic, and racially equitable society. As a union, we have the power to make that society a reality.

A lot has happened in our union during the past 100 years. A men’s local was formed in 1919 and merged with the women’s local in 1957. We became the exclusive bargaining agent for teachers in Saint Paul in 1972. In 1978, the Educational Assistant bargaining unit joined SPFT, and in the 1990s, we began representing School and Community Service Professionals. We joined the National Education Association through Education Minnesota in 1998. And of course, we have taken three strike votes in our history: 1946, 1989, and 2018.

We hope to have a community celebration in the fall to celebrate the century of work SPFT members have done in Saint Paul to improve public schools. We will have more information about that event later this summer. We plan to celebrate some of the key moments from our past in the coming school year as well.

In the meantime, it is worth reflecting on the words that formed the preamble of the first SPFT constitution, which are still as relevant today as they were 100 years ago:

We believe in democracy, and in the schools as the chief agency of democracy.

If schools are to produce good citizens the teachers must live and work in an atmosphere of freedom and self-respect.

The best interests of the school and community demand effective cooperation between teachers and the people of the community.

The object of this organization shall be to bring all teachers into relations of mutual assistance and cooperation; to raise the standards of the teaching profession by securing conditions essential to the best professional service; and to promote such a democracy in the schools as will enable them to equip pupils for their proper places in the industrial, social and political life of the community and the nation. 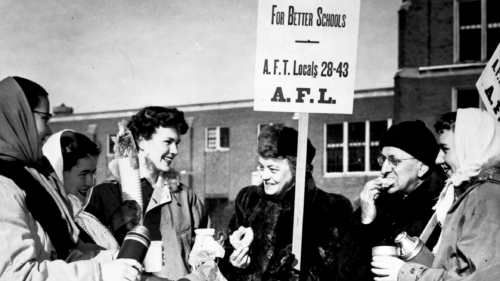