This email was sent out to SPFE members early on the morning of March 10.

Today we met with the district for our 12th mediation session.

That’s how many days ago we started our bargaining process with Superintendent Gothard and the district.

That’s how many days Saint Paul educators, students, and families have pleaded with our district leaders to see the urgency of our student-centered proposals.

That’s how many days we have told the district that our schools aren’t meeting the needs of our students, and that educators don’t have the resources they need to do their jobs to the best of their abilities.

That’s how many days we have reiterated our belief that without a firm commitment to restorative practices from the district that our schools and our community will continue to fail in our efforts to address the systemic racial disparities that continue to plague our education system.

That’s how many days we have said with a clear and united voice that our district’s priorities are misaligned, and that Saint Paul educators would not allow our students to continue to fall through the cracks while they wait for the resources they need to shine.

And that’s how many days we have waited for the district to understand that this negotiation isn’t a game of chicken where they can spend months and months refusing to engage with us, and then hope they can run out the clock on bargaining to try and force a settlement that leaves Saint Paul students, families, and educators behind.

But they haven’t listened.

Instead, when we presented a plan to stretch our proposals out over a 3-year period in order to give the district flexibility in its budgeting, they responded with a proposal that dramatically slashed the number of support staff we proposed, and restricted our support proposals to a single year.

They attempted to end bargaining and instead move our negotiations into binding arbitration. As if giving an individual who is even further removed from the classroom than our administrators the sole discretion on how to allocate district resources could ever solve the problems that our students and educators are facing every single day.

An organization’s budget is a direct reflection of its priorities, and right now SPPS is failing to prioritize our students. Our team has worked tirelessly to find a workable agreement with the district. Our most current proposal represents just 3.4 percent of the district’s total budget over the next two years to get students the supports they desperately need.

That’s why we’re striking on Tuesday.

To insist that the district make our students a priority, and to fight for the schools that they deserve. And we will continue to hold the line until we reach a settlement that puts our students first and honors the work of every Saint Paul educator.

The SPFE Bargaining Team will continue to work with the district in an effort to reach a settlement. But until a settlement is reached, Saint Paul educators will be on the picket line. 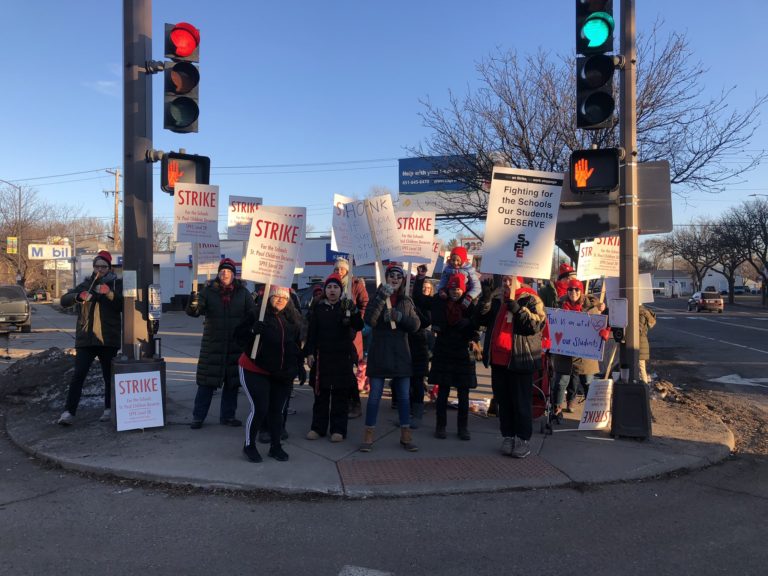 Electronic Voting to Happen this Spring at SPFE

From the SPFE Elections Committee:   SPFE Officer and Executive Board elections will be online this year.  SPFE is working…

President Faber’s message to members regarding vaccinations problems is SPPS

The following message was sent to all members yesterday (1/27) afternoon: SPFE Member, On Monday, as most of you know,…

Member Action: What do families need to know about your classroom?

This is a way to show to express our reasons of concern for returning to in-person learning so quickly. Take…

Do you want to learn how to bring restorative practices to your school? Contact Becky McCammon with questions and to learn about upcoming RP opportunities.